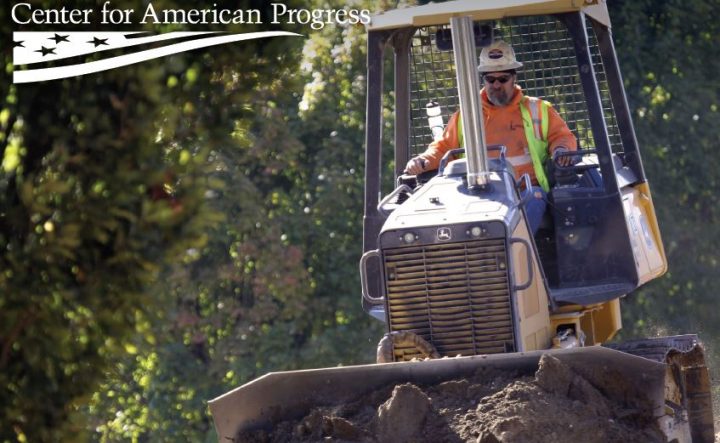 America’s infrastructure—its roads, bridges, water and sewer systems, energy grids, and telecommunications systems, to name a few—is outdated and is, in far too many places, crumbling due to lack of sufficient public investment.1 America’s construction workers faced levels of unemployment close to 14 percent in 2012,2 and our construction industry is experiencing lackluster levels of activity, as the value added by the industry in 2011 was still more than $100 billion lower than the prerecession high.3 And while public and private employee pension funds are confronting distressing levels of unfunded liabilities due to the most recent market crash and rising levels of retirement—with 90 percent of the pension funds that responded to a Wilshire Consulting survey reporting higher amounts of liabilities than assets4—public pension funds and private funds managing union pensions have more than $4.5 trillion in assets.5 Any one of these indicators alone would signal deep economic distress. Together, they should be setting off alarm bells that new economic policies are needed. The Center for American Progress is calling for new federal policies that encourage responsible pension-fund investment in U.S. infrastructure projects because such policies can help reverse these negative trends and make a significant contribution to putting the economy on sounder footing.

The Center for American Progress estimates that all levels of government, together with the private sector, invest approximately $130 billion annually in energy, surface transportation, and water infrastructure.6 But the estimates also show that an additional $129 billion per year is needed for at least the next 10 years to repair and improve our transportation and water systems, dams and levees, and energy infrastructure, all of which are critical to supporting globally competitive businesses and a high quality of life in communities across America.7
Private investment from sources such as pension funds cannot close this gap in infrastructure funding unilaterally. Nevertheless, it makes sense to find ways to accelerate private investment in infrastructure so that annual government appropriations can be directed to projects in which user fees or other dedicated revenues such as gas taxes or sales taxes and the expanded use of tolling—fees charged for the use of highway facilities—is not likely to be sufficient to repay investors. CAP estimates that at least $60 billion a year in infrastructure improvements could be financed with private capital, thereby relieving federal and state budgets of this upfront cost, although in some cases government appropriations may be part of the mix of funds used to repay investors over time.8 Even with a ready and eager pool of private investment capital, public policies that promote an increase in dedicated revenues are needed to generate the funds necessary to repay investors for their risk and effort.

Canada, Australia, and many of the EU nations are investing more in their infrastructure and modernizing it at a more rapid pace than the United States.9 A significant portion of this updating and expansion is being financed with pension-fund capital invested in projects through public-private partnerships, which give investors an equity stake in the infrastructure asset through a long-term lease—commonly known as a concession agreement—or through outright ownership.10 In some high-profile infrastructure projects overseas, U.S. pension funds are major investors. The largest public pension fund in the United States, the California Public Employee Retirement System, for instance, recently took a 12.7 percent equity stake in the London Gatwick Airport with a $155 million investment.11
Pension funds are making these types of investments when opportunities align well with their investment portfolio needs and can thus contribute to achieving fund solvency. Over the next decade investment consultants forecast that pension funds will invest $3.5 trillion in traditional infrastructure and what is termed “social infrastructure”—public buildings such as schools, government facilities, and hospitals.12 According to The Financial News, “the investments … in these funds … would build 170,000 new hospitals or pay for 73,000 miles of three-lane motorway, enough to circle the globe three times.”

This hefty level of investments represents a very small share of overall U.S. and international pension-fund investments. The Organisation for Economic Co-operation and Development, or OECD, estimates that less than 1 percent of pension funds worldwide are invested in infrastructure projects, excluding indirect investment in infrastructure via the equity of listed utility companies and infrastructure companies.

Closing the information gap to build experience
Establish a national infrastructure bank that has the capacity to hire experts who can work with pension funds where investment needs align with infrastructure projects.

Provide seed capital to launch a network of fee-supported nonprofit intermediaries that are not affiliated with any infrastructure funds or other private-investment vehicles to disseminate to pension-fund staff, trustees, and advisors expertise in pension and infrastructure investing.

Support small working conferences where pension-fund managers and project sponsors work jointly on products, metrics, templates, and any other necessary documents or information that can enable pension funds to review projects according to their needs and give project sponsors a well-informed approach to seeking partnerships with pension funds.

Establish an industry-standard group that would bring pension funds together to establish benchmarks for infrastructure investment and consider prudent fee structures for public pension funds investing in projects funded in part through tax credits, public grants, or publicly subsidized debt.